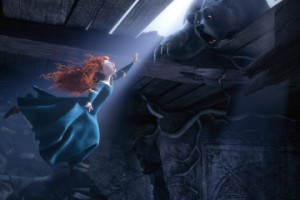 Merida is a skilled archer and impetuous daughter of King Fergus and Queen Elinor . Determined to carve her own path in life, Merida defies an age-old custom sacred to the uproarious lords of the land: massive Lord MacGuffin, surly Lord Macintosh and cantankerous Lord Dingwall. Merida’s actions inadvertently unleash chaos and fury in the kingdom, and when she turns to an eccentric Witch for help, she is granted an ill-fated wish. The ensuing peril forces Merida to harness all of her skills and resources — including her clever and mischievous triplet brothers — to undo a beastly curse before it’s too late, discovering the meaning of true bravery. Release Date: June 22nd, 2012

Brave is my favorite animated movie of 2012.  This film reminded me of when I was a little girl watching The Jungle Book, Cinderella or The Little Mermaid.  At the core of the movie there is a terrific story line, nothing complicated just a great children’s story.  I think some of the animated movies that have been released over the last 5 years have been targeted to attract adults as well as children.  This is a great idea for marketing and to rack in more dough but I think that sometimes all the adult humor isn’t needed and less is more.  Merida is mad at her mom because she is trying to find her a husband, she goes and finds a witch who says that she can change her mothers mind.  There is a spell that she forgets to tell her about so when the mother eats the magic tart she turns into a bear.  Merida’s father is a skilled bear hunter so the rest of the movie is all about her trying to mend her relationship with her mom and get her to turn back into a human.  There are a lot of really funny scenes as well as heartfelt and sad ones too.  There is even a moment when I was almost in tears and when I looked at my daughter, she was crying.  I can’t think of any animated movie that has been made recently that has gotten my emotions to be all over the place like this.  One minute you’re laughing, then crying and happy at the same time.  There was not one inappropriate scene that I would be worried about my children seeing or hearing.  That tends to be a concern of mine with some of these movies so it was nice to be able to sit back and just enjoy it from start to finish.  Overall this was a fantastic movie and I will look forward to watching it again.